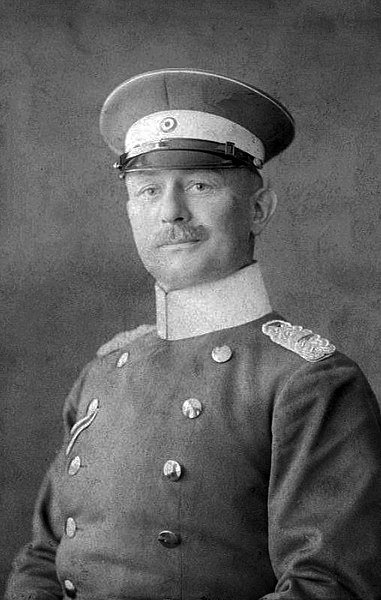 I’ve been meaning to write this blog post for a while. I read African Kaiser by Robert Gaudi last year and, while it was an easy and enjoyable read, there was an element that didn’t sit right with me. Lettow-Vorbeck fought with Africans during WWI, but I think Gaudi stresses this ‘progressive’ mindset more than he should, making it far more positive than it really was.

Paul von Lettow-Vorbeck was born in March 20, 1870 in Germany and served in the Boxer Rebellion and Herero War before fighting in World War I. He was a stubborn, maybe overly confident man, who understood guerilla warfare and political propaganda better than most people (except maybe T. E. Lawrence). He is a key figure in the African campaign and I am glad the biography was written, but instead of grappling with the elephant in the room: how colonial troops were treated by their white officers, Gaudi focuses on how progressive Lettow-Vorbeck was for even treating his African soldiers as humans. Ironically, by focusing so much on how ‘modern’ Lettow-Vorbeck was, Gaudi only makes it obvious that something isn’t right.

Yes, Lettow-Vorbeck willingly fought with African troops and seems to have had familiar relations with them, but he also had a very paternalistic feeling towards them. They were humans, but only after they had been civilized by German culture and institutions. He never thought about promoting African soldiers into command positions. When he left Africa, he left his soldiers behind, letting them deal with the Germany government on their own to get any sort of recognition or pension.

But the greater omission is that Gaudi barely mentions the conditions the African soldiers and African people were put through or the fact that many Africans were used a human mules, dying in the thousands. I would never have known of the devastation inflicted on the native population if I had not read Edward Paice’s book: World War I: the African Front: An Imperial War on the Dark Continent. Paice goes into great detail on the inhumane treatment the indigenous peopel suffered, providing desperately needed context that Gaudi should have provided in his own biography on Lettow-Vorbeck. Even Lettow-Vorbeck’s role in the Herero Wars could have used more scrutiny (the Herero War was when the Germanys brutally crushed a rebellion led by the Khoi and Herero people. By the end of the war the Herero people were virtually destroyed as a people.)

Since Lettow-Vorbeck was fighting to protect the German colonies in Africa, he should have spent more time discussing the general’s role in German imperialism and racism, especially if he was ‘progressive’ enough to treat African troops with some ‘respect’. He also doesn’t mention Lettow-Vorbeck’s role in a monarchist coup or in the Freicorp (a post-war organization that contained many members who would later join the SA. Lettow-Vorbeck, when approached by the Nazis, told them to fuck off, so he has some redeeming qualities).

The reason this stuck out to me, is because it’s a similar game historians play when writing about Confederate generals, especially in the 80s and 90s. I remember reading a biography on Bedford Forrest that did everything it could to avoid blaming him for the Fort Pillow Massacre (never mind that Forrest was a founding member of the KKK-even though he eventually left the org apparently because it was *too* racist and violent). This rewriting of history is dangerous, especially now when fascism and racism are on the rise and Neo-Nazis are describe as ‘good’ people. But even if we weren’t living during the era of Trump, this kind of history is why white people are caught off guard that racism is still a thing.

enslaved. It becomes harder when talking about a war whose legacy was to leave a festering wound in various nation’s psyche. So many nations identify themselves via the World Wars and it is difficult to swallow that those wars that liberated some people were also fought to keep others enslaved. But that work must be done otherwise people will think that Lettow-Vorbeck was progressive and African soldiers enjoyed fighting with the Germans and what’s so wrong with colonialism/imperialism? It’s a major problem in American history/psychology and I was surprised to see this same mistake repeated when talking about a German general. This element also came up when discussing the newest WWI movie: 1917. Indian troops make an appearance in the movie and the reaction is either finally! Or, damn those SJWs for ruining history.

There is a growing consensus that WWI was as much an imperial war as it was a great power war, but the imperial part is still overlooked, downplayed, or ignored. This cannot continue. We must be honest with ourselves and grapple with the allies’ less than stellar treatment of indigenous peoples, not only during the great wars, but also before and after the great wars otherwise we are only preserving the message of the oppressor.

Hopefully the next biography on Paul von Lettow-Vorbeck will grapple with his role in supporting German colonialism while using the people his government oppressed to achieve some of his greatest victories.

View all posts by pepperthephoenix

The Art of Asymmetrical Warfare

The Art of Asymmetrical Warfare discusses the history of various asymmetrical conflicts, focusing on the human and tactical dimensions. Join us as we explore civil wars, guerilla warfare, various resistance movements and stretch the definition to delve into civil disobedience and civil rights movements. Icon created by the talented @GraphicsHub3 Theme song is Symphony no. 5 in Cm, Op. 67 - III. Allegro