The Fall of Vicksburg

Today is the first week of July, an important week for American Civil War buffs. During this week, a 150 years ago, Lee took a great gamble at Gettysburg and lost, and Vicksburg finally fell to General Grant’s army.

While the Battle of Gettysburg is an important battle and has reached mythical proportions in the American mindset, I would argue that Vicksburg is just as important, if not more so, and had a longer, far more reaching impact on the war as a whole. This doesn’t negate the importance of Gettysburg, but Gettysburg legacy and its aftermath cannot be properly understood without acknowledging the affects Vicksburg’s fall had on the Confederacy. Consequently, Vicksburg may not have meant anything if Lee had won at Gettysburg. The battles, occurring separately, feed into each other, one affecting the other, and we cannot understand this important week if we don’t understand both battles.

Therefore, I decided to write about Vicksburg this year.

Vicksburg was a vital stronghold for the Confederacy, known as the “Gibraltar of the Confederacy”, and along with control of the Red River and Port Hudson, connected the eastern and western halves of the Confederacy. Vicksburg was located on a bluff in the horseshoe bend of the river, making it almost impossible to attack by ship. Northeast of Vicksburg was the Mississippi Delta and was protected from the south by a series of batteries, entrenchments, streams, and poor country roads. Vicksburg’s defenses were entrusted to Confederate general John Pemberton, a Northerner who had served in the Army during the Seminole Wars and the Mexican-American War. It seems that his decision to fight for the Confederacy, despite his two brothers fighting for the North, was because of his Virginia born wife and spending most of his army career in the south.

The Union troops had tried to take Vicksburg early in 1862, but they had not been able to take it. After failing to take Vicksburg in the summer of 1862, Union General Henry Halleck tasked Grant with taking the stronghold. His plan was to launch a two-pronged attack-Sherman advancing down the river with four divisions and Grant would continue down to Oxford, hoping to draw the Confederate troops into a battle near Grenada, Mississippi. Lincoln also wanted to launch a two-pronged assault, one that Grant subsumed under Sherman’s attack and Nathaniel Banks’ troops moving up the river from New Orleans.

Starting in December 1862, Grant crossed the Mississippi and fought against Pemberton during a series of battles, including the famous battles of Port Gibson and Raymond, the fall of Jackson, and the battles of Champion Hill and Big Black River Bridge, forcing Pemberton to retreat into Vicksburg. He had lost about half of his army during the battles and seemed to expect Confederate General Joseph E. Johnson to relieve his forces. Instead, Johnson sent him a note to sacrifice the city and save his army, but Pemberton, maybe understanding the importance of Vicksburg, maybe too committed to admit defeat now, refused.

The actual siege of Vicksburg started on May 18th with two assaults that failed to break Pemberton’s forces. The first assault, on the May 19th, consisted of Sherman’s forces had to attack a steep ravine protected by an abatis, a 6 foot to 8 foot ditch, and attacking the 17 foot high walls of the Stockade Redan. Obviously, their forces were easily repulsed. Grant fired artillery to soften the defenses and Sherman’s men attacked again, only to be repulsed again.

Grant wanting to avoid a siege, planned another assault for May 22nd. The Union artillery and Admiral David Porter’s naval gunfire bombarded the city all night, May 21st. This bombardment continued for another four hours, before the troops launched their attack.

Sherman’s forces attacked Stockade Redan again, but failed to break through. On Sherman’s right, McPherson’s corps attacked the center along Jackson Road, but also failed to make a break through. On the far left of the Union army, McClernand’s corps was heavily engaged and needed reinforcements sent from McPherson’s and Sherman’s corps. Two more assaults were tried that day, but only succeeded in killed 502 Union soldiers, wounding 2,550, and 147 missing.

Grant, disappointed that the assaults failed, prepared himself for a siege. Grant, with reinforcements from nearby Union forces, surrounded the city, first by taking Milliken’s Bend destroying Pemberton’s hope of being relieved by Johnson. Pemberton was now trapped, with barely any food, and being constantly shelled by the union artillery and naval boats. It is estimated that 22,000 shells were fired into Vicksburg, although only fewer then a dozen civilians were killed during the siege.

Pemberton reached out to Johnson for help and also sent a letter to Confederate General Edmund Kilby Smith to move against Grant’s communication lines. Smith eventually attacked late in June, but all three of his assaults were repulsed by Grant’s men. 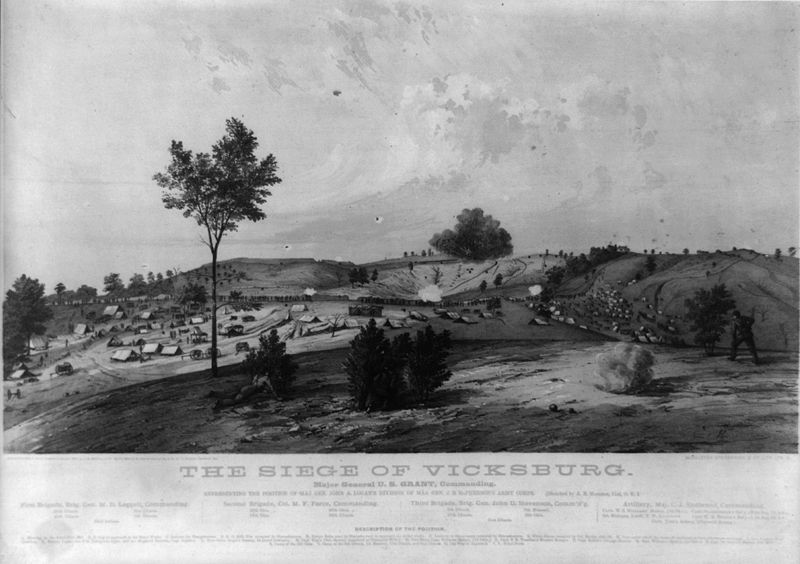 The Siege of Vicksburg

One of my favorite plans to avoid a long, messy siege, was to dig a canal across the base of De Soto Point on the west side of the Mississippi River across from Vicksburg. Its purpose was to provide a channel for Union naval ships to travel out of range of Vicksburg’s batteries. Building began on 27 June and some officers thought that the canal may have even completely redirected the entire river, leaving Vicksburg high and dry. A combination of disease, sunstroke, and exhaustion and the unpredictably of the Mississippi River doomed the project.

Another attempt to take Vicksburg, involved digging a tunnel under one of the redans and placing 2,200 pounds of gunpowder underneath it. The explosion blew apart Confederate lines and Colonel Jasper A. Maltby’s 45th Illinois Regiment charged into the crater, but were stopped by Confederate forces who rolled artillery shells with short fuses into hole. Engineers created set up a casemate in order to save the troops. A new crater was built to the south of the original crater and it was detonated on July 1st, but there was no assault. The surrender of the city on July 4th prevented the needs for any other tunnels.

Surrender of Vicksburg and Aftermath

Pemberton sent a note of surrender on July 3rd and formally surrender on July 4th. Port Hudson would fall on July 9th, giving the Union complete control over the Mississippi River, cutting the Confederacy in half, and taking away an important transportation route. 4,800 Union soldiers and 3,300 confederate soldiers were killed during the Battle for Vicksburg. Many of the Confederates soldiers who surrendered were paroled and returned to fight in battles such as Chattanooga and Atlanta.

The fall of Vicksburg combined with the defeat at Gettysburg, is now considered to be the high watermark of the Confederacy. It was also the second time Grant had captured an entire Confederate army and placed him on the path to becoming Commanding Army of all Union forces

The Siege of Vicksburg: By Middleton, Strobridge & Co [Public domain], via Wikimedia Commons